Rest for a spell on the bench in Grand Avenue Park dedicated to Vern Swanson, and you need only look across the street to see where the 1933 half graduate of Everett High School was born and grew up. Swanson played in the park as a boy and watched mill workers weave their way down its hillside path to the waterfront. “My dad also used that path to get to his rowboat,” says his son, Ben Swanson. “Firemen.. paid him to tow in loose logs so they could burn them and stay warm.” 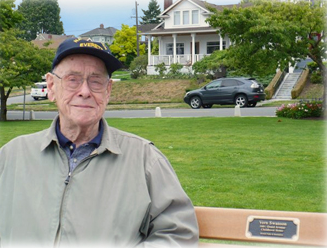 Serving in the Army

From the beach at Port Gardner Bay to the beach at Normandy - Swanson served in the Army during World War II, and was on Normandy beach under General Patton’s command. After an honorable discharge in January 1946, Swanson returned to his life in Everett and his beloved Grand Avenue Park.

In 1984 he was featured by The Herald newspaper among the Gentlemen of Grand Avenue, a group of men who met daily at the park to talk about their lives, politics and current events.

Dedication of the Bench

As Swanson and his wife, Harriet, prepared to move into the Warm Beach Senior Community in September 2008, their 4 children decided to commemorate their father's long relationship with Grand Avenue Park by donating a bench. “My Dad has always loved that park,” says Ben Swanson. “Since the park has such a special place in his heart, it only seemed fitting.”

Father and son have rested on the bench together numerous times since its dedication, enjoying the view and reminiscing.

Home
jetty island
registrations
and COVID-19 updates for programs and events
get involved
Make a difference in your own backyard
Subscribe
Get the latest parks news and updates.
art in everett
Carl Gipson center