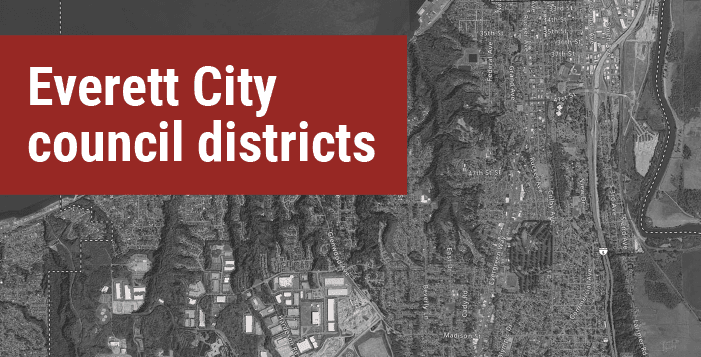 While many cities in Washington elect all of their councilmembers at-large, others have chosen to establish wards or districts, in which some or all of the councilmembers are elected by and represent specific geographic areas of the city.

Elections: City Council Position 1-5 became the district positions, and positions 6 and 7 have become the at-large positions.

2021 was the first election by district. Candidates ran for 4-year terms in positions 1-5, representing the new districts. In 2023, there will be elections for positions 6 and 7 for 4-year, at-large terms. Find voter and election information at snohomishcountywa.gov/elections.

About the 2020 districting commission and process

The video below provides you with a summary look at the process the Districting Commission went through to create map A-9.

Click the tabs below to learn more about the initial District Commission, districts and the districting process:

About the districting process

District Commission and map drawing: The 2020 commission and Districting Master Tony Fairfax completed their work in fall 2020. During the process the commission worked to develop a district plan and district map. They choose core areas of the city that lay the foundation for district boundaries. They discussed draft maps and the finer boundaries of the proposed districts. The commission worked to keep neighborhoods and communities of interest as intact as possible while following the City Charter and applicable laws. In September 2020, they engaged the community and solicited feedback to support the development of the final plan. The commission chose Map A-9 which was adopted by Everett City Council in 2020.

The City Charter and Washington state law require the City of Everett to develop new city council district boundaries following each federal decennial census. The next commission will begin meeting in early 2022 to select their ninth member, appoint a districting master, and begin evaluating and revising the city council district map based on 2020 Census data. The commission will also host public forums citywide and in each existing district. The final plan will be adopted by the city council by Nov. 1, 2022.

About the initial Districting Commission

On May 29 2019, Mayor Franklin and the City Council selected the first eight members of the initial district commission. The ninth member was selected by vote, by the eight member commission. All nine commissioners are from different neighborhoods across the city. The goal was to have a commission of location-based experts working on this project with the support of a Districting Master.

In November, 2019 the nine members approved hiring Tony Fairfax as Districting Master to assist them in the development of a district plan and map that will change the City of Everett from a majority "at large" council to "electoral districts" and two at-large council members.

Click here to learn more about the Districting Commission, process and timeline.

Learn more about the districting process and timeline