This project will build one-way buffered bike lanes along the curb of both sides of Madison Street as a part of the 2023 street resurfacing project. Everett has chosen a design that improves bicyclist safety, maintains most on-street parking, provides traffic-calming effects and maintains vehicle capacity.

The goal of this project is to make it safer and more comfortable to bike on Madison, connecting bicyclists to the Interurban Trail, the upcoming Fleming Bicycle Corridor, residential neighborhoods, bus routes and services on Evergreen Way, and the Southwest Everett Manufacturing and Industrial Center. Building buffered bike lanes will make Madison a safer, more protected bike facility, creating a multimodal transportation connection that accommodates a wide range of abilities, confidence and comfort levels of bicyclists.

Street resurfacing is scheduled for Madison Street in the summer of 2023. Crews will grind down and remove old pavement, install new traffic signal detection wires, and repave and restripe roadways. Currently there are intermittent four-foot-wide striped bike lanes on both sides of Madison and intermittent on-street parking. Everett’s Bicycle Master Plan gives the existing bike lanes on Madison a fair rating, which means that these facilities are generally considered too narrow for the traffic volumes on the particular street to be convenient for bicycle travel.

As part of the 2023 street resurfacing project and Everett’s Bicycle Master Plan, the City of Everett considered building one-way buffered bike lanes along the curb of both sides of Madison between the Interurban Trail and Gateway Terrace. To build these buffered bike lanes, the City proposed removing all on-street parking on Madison Street between the Interurban Trail (at Commercial Avenue) and Gateway Terrace near Sievers-Duecy Boulevard.

The City conducted a public survey and completed parking and traffic studies to evaluate the proposed bicycle improvements for Madison Street between Sievers-Duecy Boulevard and the Interurban Trail at Commercial Avenue. Results from the public survey, parking and traffic studies informed the final selected roadway design, which adds buffered bike lanes and retains most on-street parking by removing the center two-way left-turn lane along much of the corridor. With the exception of a few key intersections along Madison, this center turn lane is not required to maintain vehicular capacity of the roadway. At these key intersections, turn pockets will be created. This new layout will also narrow vehicle lanes slightly, which will encourage reduced vehicle speeds along the corridor.

For more information on the background and public survey phase of this project, see the video below. 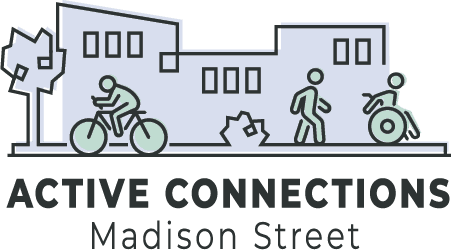