Originally constructed in 2007 the Smith Island/Union Slough Restoration site completed its monitoring period in 2017. The monitoring efforts demonstrated that the project successfully reestablished high grade estuarine habitat used by salmon and other fish as well as numerous bird and mammal species. A joint project between the Army Corps of Engineers and the City of Everett, the project breached historic dikes restoring tidal influence to 93 Acres of unused land. The project is located east of the City’s sewer treatment lagoons as shown in this Smith Island Estuary Restoration Map (PDF). This site is accessible from 4th St NE and is a great place for bird watching or a stroll on the Smith Island Trail from Langus Riverfront Park

Project permits required extensive monitoring of the project site to demonstrate that the project met its restoration goals. View or download the Smith Island-Union Slough Monitoring Reports, listed by year:

The City’s portion of the project was designed as an Advanced Mitigation site. Completion of the project created 57.9 acres of habitat credits which the City can use to offset future wetland and habitat impacts caused by City projects within Smith Island. Of these 57.9 credits approximately 24 credits have been used leaving a little more than 33 credits remaining. These credits are tracked in a credit ledger, view the 2018 Mitigation Credit Ledger (PDF). 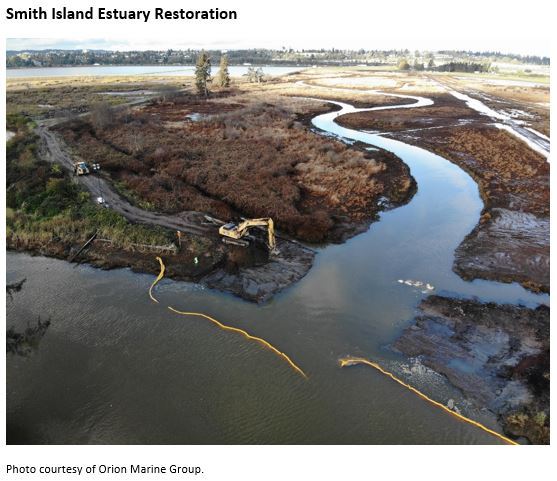 In 2018 Snohomish County and the City of Everett completed construction of the Smith Island Estuary Restoration project. The project restored tidal influences to about 378 acres of land which had been separated from Union Slough since the early 1900s. Reintroduction of tidal influences is expected to create estuary habitat within the site. The restoration of estuary habitat within the Snohomish River Basin is a high priority for a number of regional salmon recovery efforts.

See the Snohomish County Smith Island Estuary Restoration page for more information about the project and its regional significance.

Check out the before and after story map: Smith Island Estuary Before and After. Use the slider bar to switch between a 2015 pre-project aerial photo and an aerial image taken in the fall of 2018, shortly after completion of the project. Additional aerial imagery will be available on the Map Everett interactive map by turning on the “Project_Site_Imagery” layers.

The City’s portion of the project is located north of City’s sewer treatment lagoons and adjacent to the Smith Island/Union Slough Restoration site as shown in Smith Island Estuary Restoration Map (PDF). The South Smith Island Diketop Trail is open.  The trail is a large loop of south Smith Island that starts at Langus Riverfront park, extends south along the Snohomish River to the south tip of the island, and then heads north along Union Slough and the multiple restoration projects up to 12th Street NE.  At 12th Street NE the trail goes over SR529 with an overpass to the grass diketop along the Snohomish river and back south again to Langus Riverfront park.

The City’s portion of the project was designed as an Advanced Mitigation site. As monitoring of the site demonstrates its success in restoring estuary habitat the project will generate habitat credits which can use to offset future wetland and habitat impacts caused by City projects. Unlike the credits generated by the Smith Island/Union Slough Restoration project the credits generated by the Smith Island Estuary Restoration project are not limited to use for impacts on Smith Island. The credits can be used to offset unavoidable wetland and habitat impacts caused by City projects anywhere in the Snohomish River Basin. Once fully developed the site is anticipated to generate approximately 35 acres worth of credits.  As credits begin to be generated and debited a ledger of available credits will be posted here.

The City has collected water quality samples at various depths at one station at Silver Lake between 1989-2018.

The lake is sampled for the following:  chlorophyll a, total and ortho-phosphorus, ammonia, nitrate-nitrite, iron, and silica. Field measurements collected are temperature, dissolved oxygen, and Secchi depth.

The City’s monitoring of Silver Lake of the last 20 years is to look at water quality trends over time related to nutrients and lake productivity.

The productivity values or trophic state values have varied from year to year, but most have been in the oligotrophic range (below 40). The sampling data suggest that Silver Lake’s trophic state has not declined over the past 20 years.

Silver Lake has been plagued by excessive growth of an invasive macrophyte, Eurasian milfoil. Unlike algae, rooted aquatic plants like milfoil obtain their nutrients primarily from the lake bottom sediment. The City hires divers to remove milfoil by hand from the lake nearshore swimming beach annually.

The City has performed surface water monitoring of local creeks for more than 20 years. Staff perform monitoring to provide basic information on baseflow water quality. Most creeks are sampled seasonally (4 times per years during baseflow conditions). The City also collects macroinvertebrates samples from 8 creeks one time per year in late summer. For sampling locations see the Baseflow Sampling map (PDF). Data for these locations can be found in the Waterbody Monitoring Data sections of the Surface Water Comprehensive Plan basin chapters.