The City adopted a Climate Action Plan (CAP) that provides a strategic roadmap and menu of climate action options the City can prioritize for implementation.  If you have any questions regarding the City’s CAP, contact Karen Stewart at 425-257-7186 or kstewart@everettwa.gov.

Climate change on a global scale

Climate change is often talked about, but seldom understood. To break down the definition, climate is the "average" weather for a certain region. This includes everything from temperature to rain patterns. Although Earth's climate has been expected to change over time, it has been changing at a much more alarming rate due to rising levels of carbon dioxide, among other things. This has resulted in rising sea levels, droughts, extreme rainfall, and so much more. It has been determined, according to research done by the Washington State Department of Ecology, that reducing greenhouse emissions is the most significant way in which climate change can be reduced, or at the least, slowed.

Through a mix of local and state-level leadership making the environment a top priority, as well as initiatives, issued by Governor Jay Inslee, and local cities taking action, Washington state is working to be ahead of the curve in the battle against climate change. Cities across the state, and the world, have joined together and signed onto America's Pledge on Climate

Learn more about how climate change is effecting our beautiful state on the Department of Ecology's website. According to an executive summary released in 2012, our state is "addressing this challenge and has adopted policies to reduce energy use, limit greenhouse gas emissions, and build a clean energy economy." Breaking it down even further, Everett has been taking notes and working to be progressive in the ways that we approach this challenge.

What current actions is Everett taking?

Since January 2001, the City of Everett has worked tirelessly to reduce its carbon footprint as a City organization, and has even come up with a Climate Action Plan for Municipal Operations. We have done this not only through taking a "green" approach when it comes to our facilities and vehicles, but also in encouraging our more than 1,200 employees to walk, bike, carpool, or take public transportation, to work.

Everett is moving to electrify its Everett Transit bus fleet. Seven new all-electric buses will replace older diesel buses over the next two years, and we will continue to move toward a total replacement of carbon-emitting buses.

City staff is also working with the City Council to develop an updated Climate Action Plan (see above) that will keep us on an assertive path forward in reducing emissions in City operations and in educating the public about daily habits that can make a difference. We will also be seeking to work with Snohomish County, our neighboring cities and the state to adopt workable and effective strategies to reduce our carbon footprint. 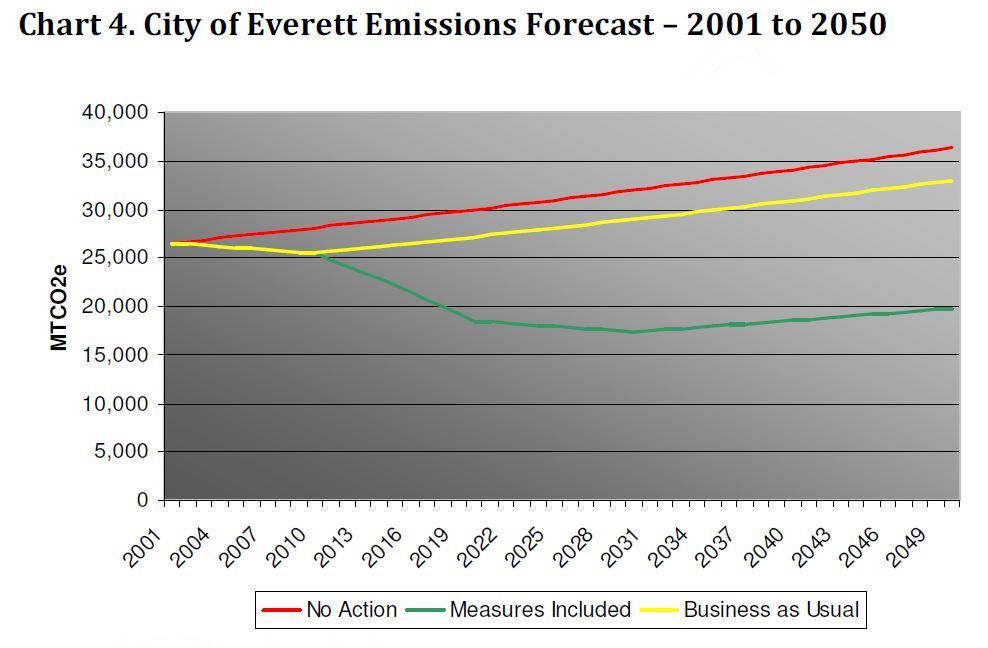 How is the City working to go green?

The City of Everett has many ways to approach and combat climate change on a city government level. The biggest affect on climate change is related to transportation and how we travel.

According to the Climate Action Plan for Municipal Operations (PDF), "the Snohomish PUD provides low-carbon electricity (81% hydropower as of 2014), and Everett’s carbon dioxide emissions primarily derive from transportation and direct natural gas use for heating. As a result, Everett could consider the following as top priorities for reduction:

3. Reducing direct natural gas use for heating through energy conservation and building efficiency

The chart below offers strategies with potential partners that correspond to the top priority recommendations:

Below are ways that the Motor Vehicle Department (MVD) has been working to replace vehicles in the fleet:

Everett continues to do its part in the battle against climate change through numerous climate initiatives and resources including:

Your thoughts might be, "How can I play a part in reducing climate change in our region?" We have some great ideas for you to consider!

Provided is a list of things that you can to do reduce your carbon footprint on the world:

Home
Map Gallery
Access many different kinds of maps
Community & neighborhoods
Find out about our community and available resources
Everett: 2044
Everett's comprehensive plan update: Planning our future together
Subscribe
Stay up to date with Notify Me®
Projects & Permitting
Find out about development activity in our community
Business
Find valuable information regarding doing business